How to choose the right series reactor

In order to further improve the power factor of the power grid, reduce the loss of the entire power supply system equipment, and realize the safe, reliable and economical optimal operation mode of the power supply system, the selection of the suppression harmonic series reactor is described in detail. This paper mainly analyzes the selection of specific suppression harmonic series reactor and TSC dynamic reactive power compensation.
The shunt capacitor for compensation is most sensitive to harmonic voltage, and the harmonic voltage accelerates the aging of the capacitor and shortens the service life. The harmonic current will overload the capacitor and cause an unacceptable temperature rise. Especially when the capacitor bank and the system generate parallel resonance, the current increases rapidly, the switch trips, the fuse blows, and the capacitor cannot operate. In order to avoid the occurrence of parallel resonance, the capacitor is connected in series with the reactor. Its reactance rate is selected according to the number of background harmonics. When the harmonics of the power grid are 5 times or more, 4.5% ~ 6% should be selected. When the background harmonic of the power grid is 3 times or more, 12% should be selected. 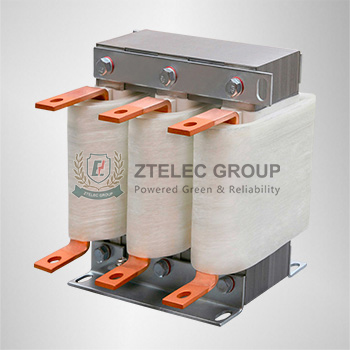 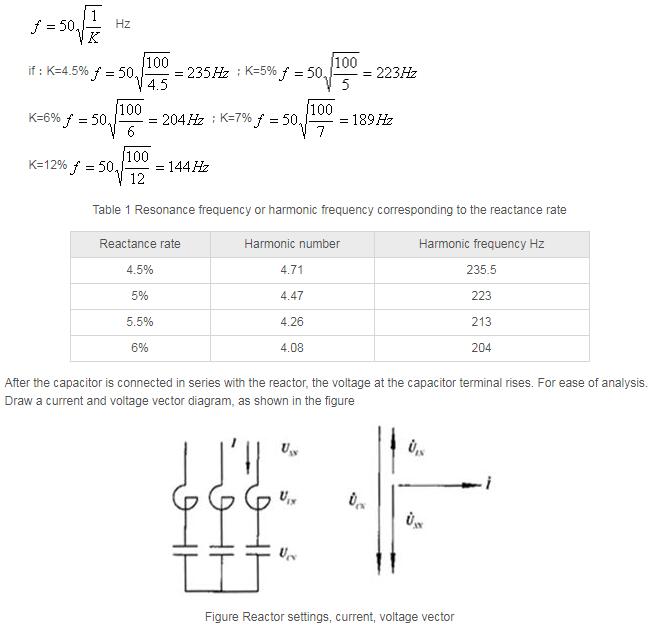 Based on the current I, the voltage drop ULN on the reactor leads the current by 90°, and the system voltage UXN is the vector sum of both: UXN=UCN-ULN. If the reactance of the reactor is 6%, then:
ULN=0.06UCN
UXN=(1-0.06)UCN
After the capacitor has a series reactance of 6% reactor, the capacitor terminal voltage is 1.064 times the grid voltage.
After the series reactor, the current will also increase, the reactance rate is K=6%, and the capacitor terminal voltage is 1.064 times the grid voltage, and the current is also increased to the same multiple. Does the reactive power compensation capacity increase or decrease? An increase in the voltage at the capacitor terminal will undoubtedly increase the reactive power compensation capacity.
(1) Capacitor reactive power compensation capacity Q’C
Q’C=(UCN/ UXN)2QC=(1.064UXN/UXN)2
Q’C=1.13QC
(2) Reactor consumes capacitive reactive power QL
QL=3I2XLN=3(1.064 UXN/UXN)2(0.06 XCN)=1.0642×0.06×(3U2XN/ XCN)=0.068QC (3) Actual reactive power compensation capacity:
Q’C- QL=(1.13-0.068) QC=1.062 QC
From the above equation, after the capacitor series reactor, the reactive power compensation has not decreased, but increased by 6.2%.
Second, the installation position of the reactor
The series reactor is the same in terms of limiting the inrush current and suppressing harmonics, whether it is mounted on the power supply side or the neutral point side. When the reactor is installed on the power supply side, the operating conditions are harsh. Because it is subjected to the impact of short-circuit current, the ground voltage is also high (relative to the neutral point), so the dynamic and thermal stability is high, and the core reactor has iron core saturation. .
When the reactor is installed on the neutral point side, the reactor requirements are relatively low, and generally it is not affected by the short-circuit current. There is no special requirement for dynamic and thermal stability, and the voltage to the ground is low. It can be seen that it lacks the ability of the reactor to withstand short-circuit current surges than when installed on the power supply side.
Third, the structure of the reactor
The structure of the reactor mainly has two structures of hollow core and iron core.
The main advantages of the core structure reactor are: low loss, good electromagnetic compatibility, and small size. The disadvantage is: there is noise and the core saturation loses the current limiting capability when the accident current is large. When the dry iron core and the reactor made of oxygen resin cast coil have good dynamic and thermal stability, it is suitable for being installed in the cabinet. Although the oil-immersed iron core reactor is larger in size, it has less noise, better heat dissipation and convenient installation, and is suitable for outdoor use.
The main advantages of the air core reactor are: good linearity, strong ability to limit short-circuit current and low noise. The disadvantages are: large loss and large volume. This kind of reactor is suitable for outdoor use, but it is not suitable for being installed in the cabinet. Installation outdoors can easily solve the problem of electromagnetic induction. It is best to use a phase separation "good" or "one" shape. This distance between the phases helps to prevent phase-to-phase short circuits and narrow the scope of the accident. So this arrangement is preferred. When the site is restricted and cannot be separated by phase, stacked products can be used. The winding direction of the B-phase coil of the three-phase stacked product is in the opposite direction to make the pillar insulation under pressure, so it must be installed according to the manufacturer's specifications.
Fourth, TSC dynamic reactive power compensation, it uses thyristor switch (zero-crossing trigger), cast power capacitor group to achieve reactive power compensation. Effectively improve the power factor of the power load, with significant energy saving effect. The series reactor is used in the TSC system, which can effectively prevent harmonic amplification and effectively absorb most harmonic currents. 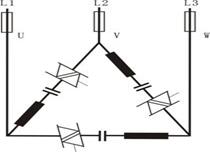 The core component is the controller. Based on the signal processor DSP and VLSI circuit, all the data are analyzed in each grid cycle within 1ms. The required reactive compensation technology is calculated. The harmonic components of all phases are calculated at the same time, and the trigger signal is issued to ensure 5~20ms switching capacitor bank, AR type string 7% reactor (balance compensation system), or 14% reactor (unbalance compensation system) to prevent 5th and 3rd harmonic parallel connection between capacitor bank and power grid resonance. Most of the spot welding equipment in the automotive industry uses 380V power supply, which is powered by two phases (L1—L2, L2—L3 or L3—L1). Usually, the balance problem of three-phase load has been considered in the power supply design of the factory. The power supply layout of the machine is close to balance, avoiding zero-sequence current due to three-phase unbalance, so in this case, three-phase balance is usually used. See the relevant information of several big car companies in Europe and America. When the power imbalance of the spot welding machine is less than 20%, it is not harmful to use the reactive power balance compensation for the power supply network. When the imbalance is more than 20%, it should be considered. Unbalance compensation