Phase Shifting Rectifier Transformer is the power transformer for rectifier equipment. The rectification device is characterized by the original input current, and the secondary side outputs DC after rectifying the original. Converter is a general term for three working modes of rectification, countercurrent and frequency conversion. Rectification is one of the most widely used. 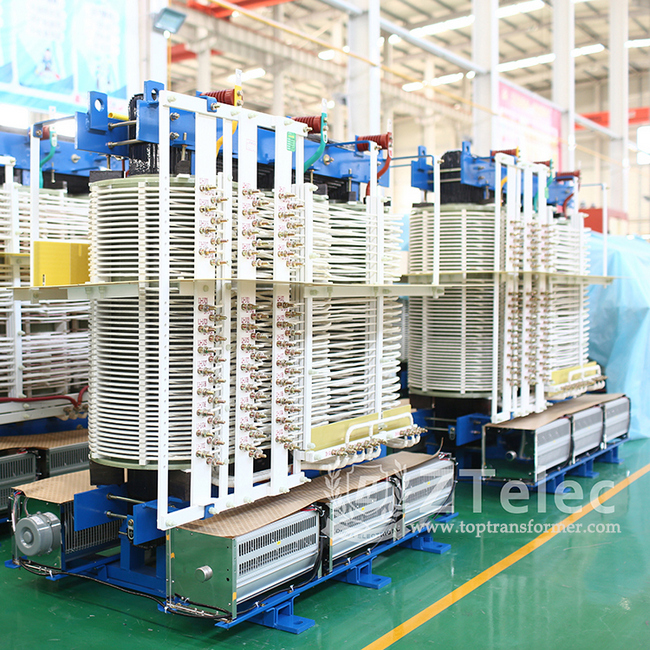 3 Phase-shifting rectifier Dry-type Power Transformer is a device that provides multi-phase rectified power for medium and high voltage inverters. It adopts the principle of Yanbian triangle phase shifting, and through a plurality of different phase shift angle secondary windings, it can form a rectifier transformer with equivalent phase number of 9 phase, 12 phase, 18 phase and 27 equal. The primary side of the transformer directly enters the high-voltage power grid, and the secondary side has a plurality of three-phase windings, which are represented by 0°, θ°, ..., (60-θ)°, etc., and the low-voltage three-phase windings on the secondary side of the Yanbian triangular connection transformer. At the same time, it indicates the phase shift angle of each low voltage three-phase winding line voltage with respect to the third-order winding. When each phase is connected in series by n H-bridge units, θ = 60°/n, the multiplex of the input is realized, and 6n pulse-wave rectification is formed. In this way, if the power balance of each H-bridge unit is the same, the current amplitude is the same, and the input current of the theoretical grid side does not contain the harmonics below 6n±1, and the power factor can be improved. Generally, no reactive compensation and harmonic filtering device are needed. .

ZTELEC has introduced the international advanced level and has developed a new generation of Phase Shifting Rectifier Transformer through self-innovation.