Why is the epoxy board flame retardant?

Epoxy board is also called epoxy fiberglass board. Glass fiber cloth is made of epoxy resin and heated and pressed. It has high mechanical properties at medium temperature and stable electrical performance under high humidity. Therefore, it is widely used in various fields. But few people know why epoxy boards are flame retardant. 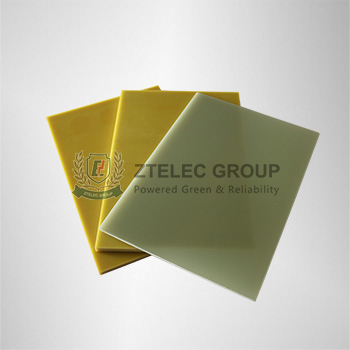 Flame Retardant Mechanism: Gas phase flame retardant and condensed phase flame retardant are two flame retardant modes recognized for a long time. The epoxy board contains phosphorus, nitrogen, inorganic metal hydroxide, and the like. When phosphorus is burned, in the condensed phase, there are dehydration, cross-linking, carbon formation, etc., which can increase the carbon formation rate, meaning that less matter is burned. Generally, when the carbonization rate is as high as 40-50%, LOI can be higher than 30%, carbon production will reduce the formation of flammable volatiles during thermal decomposition, which will affect the next thermal degradation, forming a carbon dioxide layer on the surface of the material, and the LOI of carbon itself is as high as 65%; The formation of dilutable combustible gas, both of which will carry away or absorb heat, the formation of phosphorus-containing high polymer can greatly increase the LOI index; in the gas phase, the formation of small molecular phosphides such as HPO2, HPO to inhibit flame propagation to achieve flame retardant performance. Nitrogen-based flame retardants burn and decompose to absorb a large amount of heat, release nitrogen, dilute the contact between oxygen and epoxy resin, and nitrogen can promote the presence of multiple bonds, and such materials burn more energy, in epoxy The promotion of PN-containing intermediates in fiberglass sheets is a better phosphorylation reagent than the original independent phosphorus-containing system. In the epoxy fiberglass board, inorganic additives are added, and metal hydroxides are commonly used. When decomposing at high temperature, a large amount of heat is absorbed to form metal oxides and water. The former can be used as a heat-insulating flame-retardant body, and has a very high surface area and can be adsorbed. Smoke (smoke) and combustible materials make the amount of carbon dioxide released when the material is burned, water is conducive to cooling, promote dehydrogenation and protect the carbon layer. Phosphorus in the combustion process produces a surface effect phosphide which improves the dispersion of the metal hydroxide and simultaneously improves the flame retardant efficiency.
ZTELEC introduced an international advanced press line in 2018 to produce high-standard flame-retardant epoxy sheets.